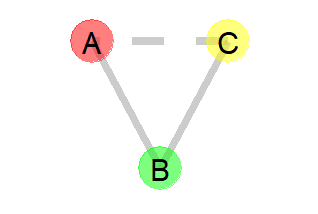 In this post, we will demonstrate how the ABC principle can be used to find new diseases related to existing drugs by means of interconnecting genes. The famous example of this method was provided by Swanson who found a new relation between fish oil and Raynaud’s disease. The drug-repurposing analysis in this post is done with the KMINE API for text mining. The full document with more details and interactive results is available here. The R-script that was used for this analysis is available on request.

In this example we start with the drug WAY100635. This is a compound that binds to serotonin receptors in the brain, specifically to the HT1A- receptor (HTR1A). A PubMed search on this compound yields > 1200 articles. The first step is to derive the genes that are related to this compound, which can be done with a single statement using the KMINE-API service. The genes that are retrieved are shown below. The genes that are connected with a thick line, have a strong relationship, the genes connected with a thin line have a weaker relationship. Notably, the actual target of WAY100635 is among the strongest connected genes. 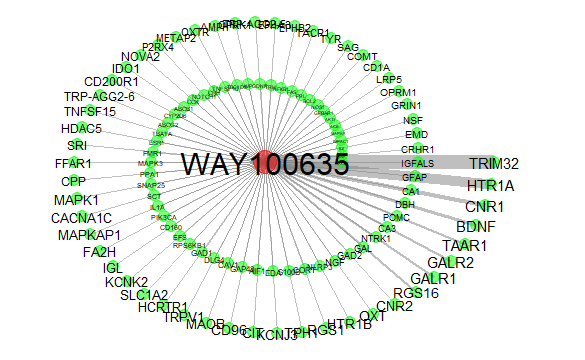 The next step is to find the related diseases for these genes. Since every single gene is connected to a lot of diseases, we limit this expansion to only diseases that are connected one or more times to the top 10 genes that are related to WAY100635. We also filter away diseases that have already been described in the context of WAY100635, so we keep only truly novel relations. 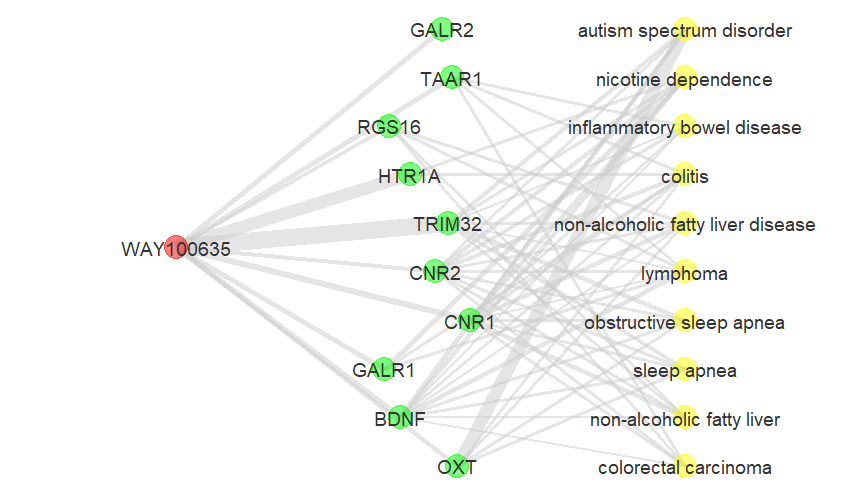 Among the top diseases are a number of CNS related diseases such as autism and nicotin dependence, but also diseases with a gastro-intestinal link, such as colitis and inflammatory bowel disease. Important genes that connect WAY100635 to these diseases are the cannabinoid receptors CNR1 and CNR2 and GALR1.

Application to other compounds

TenWise has a list of over 8000 research compounds. A similar analysis as shown above can be executed for all of these compounds using this scripting approach. The links do not have to be limited to diseases; also the other vocabularies of TenWise, containing metabolites, pathways, phenotypes and adverse effects, can be used for discovery.